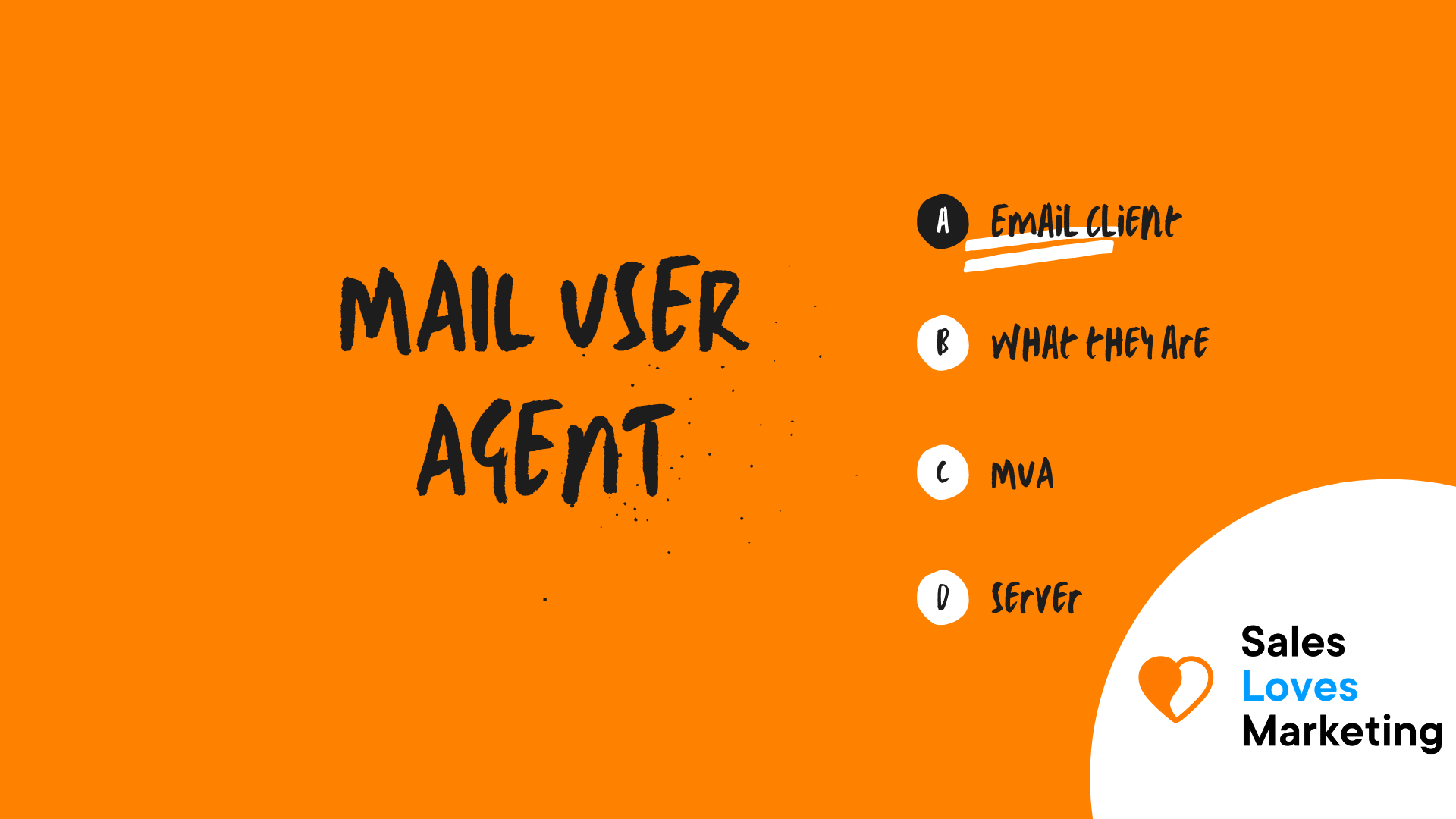 What is a Mail User Agent (MUA)?

A mail user agent, which is also known by the name of an email client, is a computer program that gives you the ability to send and retrieve email through interaction with the user.

MUAs are the part of the Simple Mail Transfer Protocol (SMTP) system that is responsible for creating email messages and then sending them to a Mail Transfer Agent (MTA).

MUAs can be software applications, or they can be webmail services.

How does an MUA work?

When a person “A” wants to send an email message to another person, “B,” he starts the Mail User Agent of his choice, writes his message, and clicks "Send."

Person “A's” MUA contacts the Simple Mail Transfer Protocol (SMTP) server. The MUA of "A" gives information to the SMTP server about who is sending the message and whom it is addressed. Finally, it sends the headers and the body of the message itself. When the SMTP server takes the message and agrees to carry it to its final destination, the MUA informs “A” that the transmission was successful.

The SMTP server saves the message and tries to get it to its final destination. If person “B” is in a very distant place from the place of origin of the mail and also has a different email provider than a person “A,” the SMTP server of the email provider of “A” decides which server manages the mail for the "B" domain. The server looks up this information in DNS (Domain Name Server). DNS tells the mail server where to send mail for a given domain.

The SMTP server of person “A's” email provider connects to the other SMTP server. It transmits the message to him in a similar way as the mail program of “A” did previously. The server can communicate directly with the final SMTP server, responsible for the mail of person “B,” or there can be a series of intermediate servers that forward the message to its destination. The exact route the message will travel depends on "B's" email provider and, to some extent, on the conditions of the Internet connection at the time of transmission. If “B's” main mail server is down, mail may be temporarily forwarded to another server. Or “A's” mail server may stop the message and then attempt to relay it from time to time.

Finally, the message from person "A" reaches the final server, which stores the email destined for person "B." The message will remain stored there until "B" connects to retrieve his mail. When "B" presses "Retrieve mail" in his MUA, the mail client communicates with the server and downloads the mail. Generally, instead of using SMTP, this final download is done through another protocol called POP3 (Post Office Protocol) or IMAP (Internet Message Access Protocol).

What is the difference between a Mail User Agent (MUA) and Mail Transfer Agent (MTA)?

An MUA (Mail User Agent) is a software, program, or application that allows a user, at least, to write and read email messages. They are often called a mail client. Obviously, many MUA programs offer many more functions to the user; some of these functions are retrieving messages through the use of the POP and IMAP protocols, the configuration of mailboxes to save the messages, or help to show new messages. To an MTA (Mail Transfer Agent) program, which will send them to their final destination.

These programs or MUA applications can be based on a graphical appearance, like Mozilla Mail, or they can have a simple text-based interface, like Mutt or Pine.

An MTA (Mail Transfer Agent) program or software handles the transfer of e-mail messages between machines using the SMTP protocol. A single email can go through multiple MTAs before reaching the final destination. Users are generally unaware of the existence of these agents, even though each message is sent through at least one MTA.

Although the process of sending messages between machines appears to be quite straightforward, the whole process of choosing whether a specific MTA agent can or should accept a message for delivery to a remote host is quite complicated. In addition to this, due to the problems created by spam, the use of a specific MTA is usually marked or limited by the MTA's own configuration or the network access of the system that runs it.

There are several larger and more complex MUAs that can also be used to send mail. However, this action should not be confused with the proper and true functions of these agents. For people who are not running their own MTA to send outgoing messages to a remote machine for delivery, they have to employ a capability in the MUA capable of transferring the message to an MTA for which they are authorized. However, the MUA agent does not directly allocate the message to the final recipient's mail server; this function is performed by the MTA agent.

Some examples of MUA agents are: